Thibault and Nicole Ramirez (also confirmed for the WCS intensive),

Thibault and Nicole have been together since the beginning of 2019, quickly building a strong partnership and establishing a name for themselves. Becoming the World Champions of 2019 with their winning Showcase routine, they immediately began traveling all over the world teaching, performing, judging, and competing. They choreograph routines and coach dancers all around the world with an emphasis on mentoring and competition. 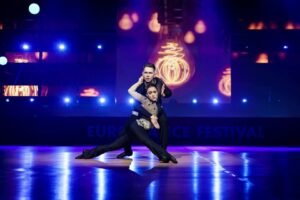 They are the creators of Flash Choreo, a mini choreography intensive for dancers to challenge themselves and perform a routine in short amounts of time.

They have developed a great rhythm teaching classes and intensives together, offering great technique in a relaxed and fun environment.

With over 20 years of knowledge in West Coast Swing and other partner and solo dances, their teaching style is very appreciated everywhere they go and benefits dancers of all styles. Their emotive, passionate spirits shine when they are on stage and while teaching. They love to motivate their students to excel and reach their maximum potential. Their personalities are very energetic and open to connecting with people, on and off the dance floor.

Natively from Czech Republic & Reunion Island, Jakub and Em took their first steps into the dance world at the age of 16 and 12, both starting with Ballroom Dancing (Latin, Standard & line-dancing).

After her arrival in France at the age of 18, as Em sought to start a new dance form, she bumped into a video of Jordan & Tatiana, and fell in love with WCS right away. She was trained by Maxence Martin who gave her a solid knowledge from which she developed her own dancing and teaching style. Today, she acts in the WCS Community not only as a teacher, but also as a DJ and photographer. 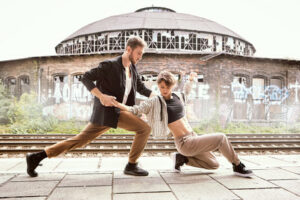 Jakub’s dance world consists of social dances such as Zouk, WCS or Salsa but there is also a part of solo or group Modern and Contemporary dances. He started to dance and compete in WCS in 2014, guided mainly by Maxence Martin and Mario Robau, while using a lot of his background knowledge in his approach. His philosophy in dance is focused on communication.

They were both hooked since they discovered WCS, and were especially drawn to the creativity, musicality, and freedom within the dance. Just by pure chance, they had to teach together in a styling workshop in June 2016, thanks to Rita and Adam. At the end of the week-end the students suggested that they should partner up, so they did. 🙂

They have been traveling the world ever since, flying from country to country to share their passion for WCS, and they love it…

Both a Champion Lindy Hopper and a Champion West Coast Swing Dancer; Ben Morris began swing dancing at the age of 12 and is now a 2 time World Swing Dance Champion, 3 time U.S. Open Swing Dance Champion, Spirit of Lindy Hop award winner, a California Swing Dance Hall of Fame award winner, and a featured dancer in the movie Love N’ Dancing and the Leann Rimes Music Video “Swingin.” A graduate of UCLA, he currently lives in Orange County, California, running his weekly dance Swingin the Blues and regularly guest teaching at several local colleges during the week. On the weekends Ben travels all over the world to teach, compete, mc, judge, and perform and is known for his fun dance style, infectious personality, and enjoyable workshops. 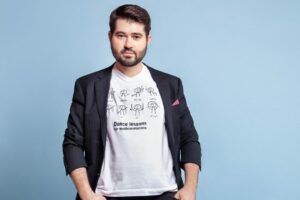 Alexandre & Christelle teach in Geneva since 2012, in the Jang Widler’s school. They began with regular classes in Geneva, where they are still teaching. They have been teaching internationally since 2013 and are regularly requested in different WSDC and non-WSDC events. 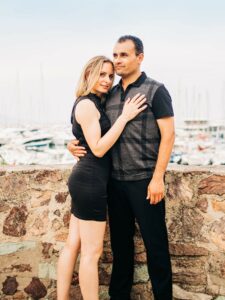 They are known for their accessibility during social and also their pedagogy and detailed techniques.

Alexandre is the founder of Dance Profiling, « technique is important, but the most important is to find the right technique for each person, because we are all different ! ». With this approach you will know exactly how works your body and what are the differences with the others. Then Alexandre will give you the best technique just for your body !
He’s also teaching BioMecanic in golf and other sports and with shooters, Specials forces, etc…

Alexandre is also eligible to be Chief Judge at WSDC events.

They have been competing in the All-Star division since 2015 and are still competing.

Semion has been dancing ever since he was eight. He started with ballroom dancing first, then got into social dancing, and finally into West Coast Swing. He is known for his musicality and great connection with his partners.

Maria has been dancing since 2007. In 2008 she fell in love with social partner dances. She started learning hustle/discofox and salsa. She had been dancing hustle and discofox for 4 years, working on her solo choreography as well when West Coast Swing came in to her dancing life. After that she couldn’t stop dancing WCS. She enjoys the versatility of the dance, bringing new emotions, options for musicality and styling to every dance.

Their partnership emphasizes technique, musicality and connection. They love the possibilities for communication and dialogue between partners during every dance, and seek to help their students discover this incredibly fun aspect of WCS. They share a philosophy that care and attention are the best things partners can give to each other during any dance. 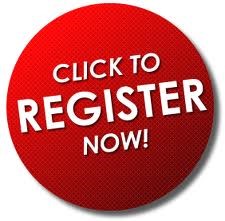